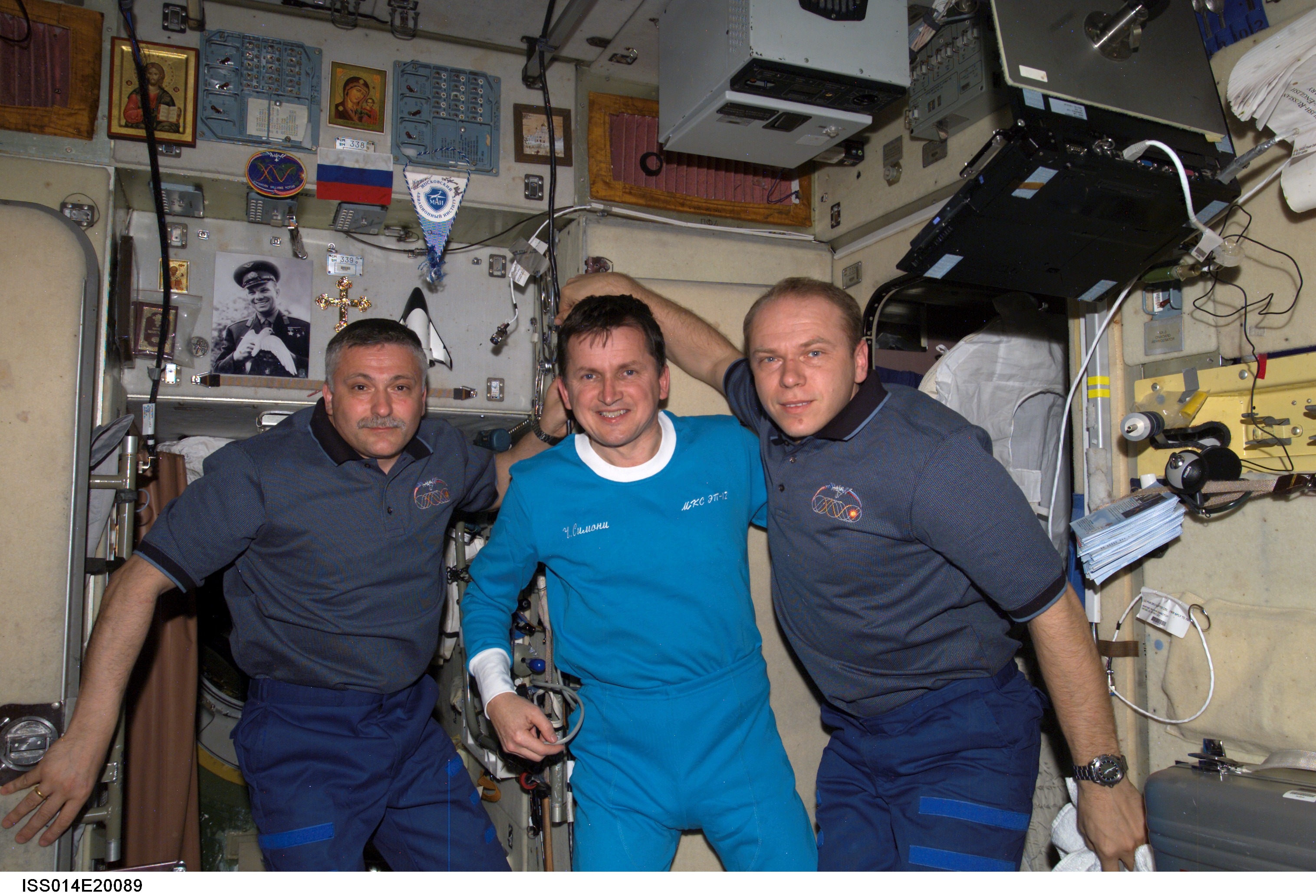 If you’ve read our previous post, you know that one of ISSAP‘s strategies for studying the material culture of the International Space Station is to look at changes between the photographs taken on board. In this post, we’re going to discuss one example of cultural life on ISS: religious expression.

As we’ve studied photos of the Zvezda module, we’ve noticed that it has been used by crews to display all kinds of cultural items, such as paintings, photographs, flags, patches, and more. Zvezda is the Russian service module, and it was one of the original pieces of the space station to be installed, four months before habitation of ISS began in November 2000. Until 2008, Zvezda contained the only two permanent crew quarters on the space station. It also contains one of the two galleys on board (the other being in the US Node 1 module) and one of the two bathroom facilities (the other being in the US Node 3 module). A treadmill for exercise is located in Zvezda, and it is a primary location for the docking of Soyuz capsules that carry crew members to and from the station. So it makes sense that from the very beginning of the station’s history, Zvezda has been a hub for all kinds of activity.

As you can see in the image above, the aft end of Zvezda received all kinds of decoration, including images, symbols, objects, and even a book. In fact, the images collected by NASA (and helpfully posted on their public Flickr page) show that this phenomenon began as soon as habitation of the station began. In the slide show below, you will see that already in Expedition 1, an icon was placed at the highest point of the aft wall in the center, making it highly visible from the primary direction of approach. This location made its significance clear. Soon after, many more photographs and paintings can be seen in this area. These items appeared and disappeared over time; they were moved around and reorganized.

The pictures posted at the aft end of Zvezda are extremely interesting, since so many of them are explicitly religious and all of those that are religious pertain specifically to Russian Orthodox beliefs. We haven’t spotted any explicitly religious items in the US, European, or Japanese modules yet (apart from some Christmas decorations), so the Zvezda objects are notable. Since the fall of the Soviet Union, the Orthodox Church has re-asserted itself in Russian life and been supported by the Russian government. The icons and other religious paraphernalia may therefore represent an institutional effort to display a new Russian identity marked by Christianity. The presence in one of the photos in the slide show of a ribbon from Russia’s highest military award seems to indicate such a symbolic link. At the same time, it is also worth noting that at certain moments, the religious items are drastically reduced in number or vanish completely from our photographs (as appears to be the case currently), perhaps indicating that some crew members are less religious or even non-religious.

Images of Russian space heroes, on the other hand, appeared early on, and seem to have always been present since their first appearance. These include multiple images of the first human in space, Yuri Gagarin; the Russian theorist who described life in space, Konstantin Tsiolkovsky; and the original director of the Soviet space program, Sergei Korolev. The placement of these iconic and heroic but secular images in the same area with the religious items imbues them with a kind of religious significance, too. They most frequently appear in a niche directly over a portal leading to a Soyuz capsule — in  a sense, they are located over the ISS front door. The Russian crew visually lay claim to a significant space heritage by their display of these portraits in such a prominent position. Since Zvezda has been one of the most frequent venues for video-conferences with Earth audiences, these images are placed in a location that will make them visible beyond ISS. As a result, it becomes clear that even if ISS is “international”  in many ways, distinctly national displays can and do happen.

We need to do more research not only into the specific items displayed here in Zvezda and elsewhere on ISS, but also into the relevant context: who are the crew members associated with changes in the display? What happens when non-Russians occupy one of the crew quarters in this area? Are there specific devotional acts that occur here? What historical events on the ground may be related to the appearance, disappearance, or placement of any of these items?  We’re busy building a database to track this information, and will write more on these topics in the future. Stay tuned!

Next: Religious life on ISS, part 2

Special thanks to Prof. Wendy Salmond for her help identifying the subjects represented in the icons on Zvezda.