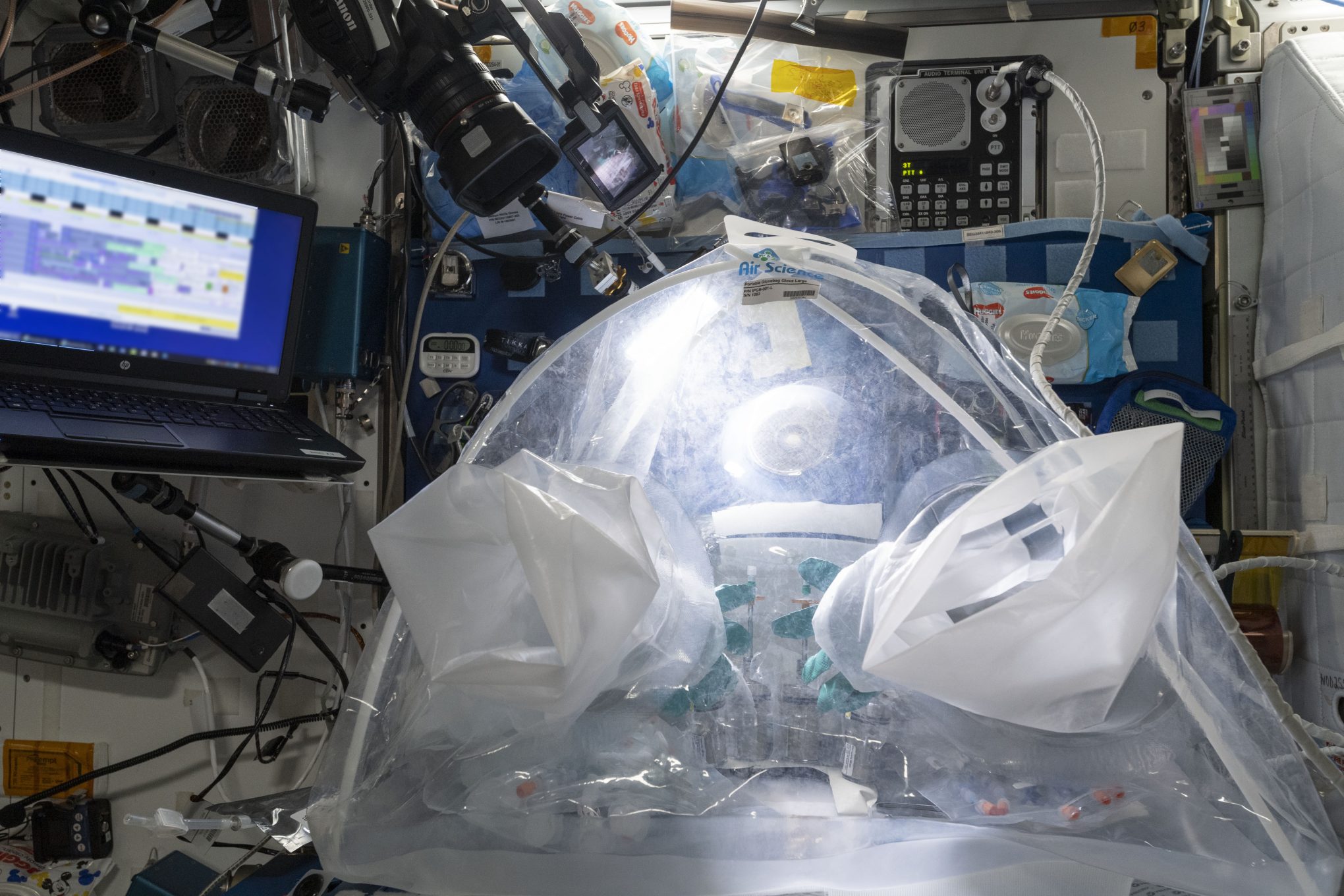 One of the questions we’re asked most often is, “If you want to know about what it’s like to live in space, why don’t you just ask the astronauts?” This is sometimes accompanied by surprise that it’s even possible to do archaeological research on a society that exists in the present, rather than the past. So in this post, we thought we’d talk a little about how we are interpreting images from the SQuARE experiment, and how they enhance our understanding of life on ISS. We’ll do this by looking at one of the individual images that have been returned. Keep in mind, however, that interpretation of the images will be derived as much – if not more – from the aggregating of data from multiple images, as it is from looking at single photos.

Let’s start with an image similar to the one we used for the previous blog post.

Here we are looking at the starboard workstation of the US Node 2 module, also known as Harmony. This is an area that is usually associated with maintenance and technical work; it is also adjacent to four of the space station’s eight current crew berths, where all of the US crew are now residing (the fifth member of the team living in the US Orbital Segment, ESA astronaut Matthias Maurer, has a brand-new berth just around the corner in the Columbus lab). We love this photo, because the light makes the glovebag look like some kind of a prehistoric deep-sea fish with bulging eyes…

…okay, back to the archaeology! So what we do as archaeologists is rely on our observations of material culture – the objects and built spaces – and the relationships between them in a given context, to develop an interpretation of what happened, and what it means. So, here we have a new piece of equipment, one used to isolate the subject of work from the surrounding environment, and even from the person doing the manipulation of the subject. As we’ve noted before, there are permanent gloveboxes located elsewhere in ISS, so the use of the portable one indicates that those must not be available because they are already in use. It’s also possible that the work happening here is lower in priority or shorter in duration. The workstation is a good location for the portable glovebag because it is a reserved space for work (although that work is not primarily scientific) – there are not that many similar reserved spaces in ISS, since most of the walls in the various laboratory modules are taken up by racks for experimental facilities like freezers, centrifuges, furnaces, plant-growing facilities, etc.).

We can see the same portable glovebag on the workstation as before, with four translucent cylinders inside it, with silver lids and what appear to be plungers coming out of the tops. By zooming in, we can read the labels on the cylinders, which say “Concrete mixer.” There are also some other tubes with blue and orange parts to the left and right.

There is a laptop in the upper left corner, showing the day’s schedule for each crew member, with a video camera just above it to the right, and a bright white LED light shining into the glovebag. The presence of the laptop, and especially of the camera and light and their positioning relative to the glovebag, indicates that remote observation is an important component of the work happening here. In other words, ground control or the investigators who designed the procedure (or both) must need to be able to see what’s going on and communicate with the crew member, either to ask questions or give feedback. And, finally, there’s a foil pouch with a straw, probably holding water for the crew member to drink.

What are we to make of this assemblage of items? First, we have a strong indication of the flexibility of the starboard workstation for short-term scientific projects, including, apparently, materials science research. Second, we can see the integration of ground and space in the performance of work, which might be both helpful, but also feel like someone is constantly assessing your performance – in this case, literally looking over your shoulder. And we get a much stronger sense of the materiality of this activity for the crew – the manipulation of the experiment must be somewhat clumsy and unstable, not only because of the gloves (and we can’t forget the microgravity environment), but also because of the transient, unfixed nature of the glovebag, and the difficulty of positioning it and seeing into it. The mixing of spatial categories is also evident – this is a workspace next to four people’s bedrooms, even if nobody was probably resting at the time this photo was taken (12:41 PM local time). Most people don’t have to actually live inside their laboratories: this mixing of functions that are usually separated in terrestrial spaces is typical of space habitats.

The photo is still, capturing a moment in time, but in this configuration we can read a series of decisions and actions taken by the crew before the photo, from which we can predict possible future actions too. The drink pouch isn’t just an artifact: it shows the maintenance of the crewmember’s body – a constant task in space as on Earth – at the same time as they carry out their regular work. The portability of the glovebag represents the conflicts between the available space and facilities on the one hand, and the science that has to be conducted on the other. They have to make do with the space they have; and this means adapting different spaces to requirements.

If we asked the crew about this photo, it’s possible that they would articulate some or all of the points in our brief analysis here. They might have additional insights, too. But the archaeological approach means that we are not reliant on them, or their abilities and willingness to describe what was happening in this moment, or across 60 days of moments, accurately. That’s where the value of our experiment comes in.

POSTSCRIPT: Almost two weeks later, Matthias Maurer posted his work on the concrete experiment on social media. Check it out, and see how his blurb, and ESA’s description and edited video compares to our discussion. We aren’t saying that it isn’t helpful to also have this information, or to be able to talk to Matthias – as we will – after his mission. But we are saying that archaeology can reveal new insights and new information that isn’t otherwise available.